You are here: Home / The evolution of the Yorkshire pudding

The evolution of the Yorkshire pudding

After hearing of the Yorkshire pudding wrap sending Sunday roast lovers into fits of gravy-drenched ecstasy all over the country, we felt it was our duty to head across to York and visit The York Roast Co. to see what all the fuss is about.

When it comes to the County of the White Rose, aside from the picturesque Dales, and the penchant for dropping various vowels and consonants from our spoken word, does this part of the world have a more famous export than the Yorkshire pudding?

While the exact origins of the Yorkshire pudding are unknown, it has always been a dish associated with this county. The first time in which the Yorkshire prefix was used dates as far back as 1747, when cookery writer Hannah Glasse offered a recipe for the dish in The Art of Cookery made Plain and Easy. Often served as an appetiser with gravy – and not as a main meal accompaniment – the Yorkshire pudding’s original purpose was to satisfy the hefty appetites of heavy-labouring working men, particularly at times when meat was expensive. In poorer households, children were encouraged to fill up on the so-called appetising Yorkshire puddings as a means of negating their appetite for the meat main course, that would’ve likely been in extremely short supply.

However, a decade before Glasse’s styling of the dish, it was first devised as a dripping pudding in the book The Whole Duty of a Woman, and very much synonymous with the cooking of meats – generally beef. The dripping version of the pudding was cooked underneath meat as it roasted above, meaning that the batter would collect the fat and juices from the meat, adding flavour and not going to waste. It goes without saying that the more health-conscious clean eating individuals of 2017 were not to be found in the eighteenth-century, as at that time, the aim was to fill up on those crucial calories by any means necessary, and make the absolute most of any resources available.

Despite the passing of almost three centuries since Hannah Glasse forever immortalised the Yorkshire pudding name, and the increasingly widespread availability of vast global cuisines, it is staggering to think that a thrown-together-and-baked combination of eggs, flour, milk and salt can still inspire the sort of foodie-frenzy that has descended upon The York Roast Co. in recent weeks.

The family-run business was founded in 2004 and has largely made itself known for specialising in ‘freshly roasted carved sandwiches’, though the Yorky Pud – the subject of today’s visit – has actually been available on The York Roast Co. menu since March this year. It was the sharing of a picture of the Yorkshire pudding wrap on the business’ Facebook page that went viral and attracted attention from the BBC who then shared similar posts on its own social media channels. This would go some way in burgeoning a sense of Yorkshire pudding pandemonium that has engulfed the business’ restaurants nationwide ever since.

Since the Yorky Pud captured the imagination of the public little under a fortnight ago, Yorkshire pudding lovers far and wide have travelled to the business’ various branches en masse to sample a taste of the surprise hit that has soon become a genuine sensation. With locations in Salisbury, Chester, Shrewsbury and two in York, you could assume that the Low Petergate and Stonegate branches of The York Roast Co. are somewhat the spiritual homes of this booming business – not to mention the Yorkshire factor.

Detailed on its menu as ‘a giant Yorkshire pudding wrap with your choice of succulent roast meat, roasted vegetables or fresh red cabbage slaw, stuffing, a drizzle of tasty gravy and your favourite sauce’, the Yorky Pud is essentially a Sunday roast dinner burrito. A far cry from Hannah Glasse’s eighteenth-century concoction, it is perhaps an interesting sign of the times in that we desire instantaneity and convenience now more than ever. But one that is also heart-warming and reassuring as we are clearly still able to be captivated by the little pleasures in life – a term certainly used figuratively in relation to The York Roast Co.’s colossal creation.

As weekend queues have seen as many as 60 people lining up to get both their hands and mouths around the Yorky Pud, we took some advice and visited their Low Petergate branch on a weekday afternoon to ensure we’d be able to get a piece of the Yorkshire pudding wrap action in good time. But even on the blustery Monday mid-afternoon that we made the trip across to York for our Yorky Pud pilgrimage, the Low Petergate branch still managed to have a queue stretching outside of the restaurant, albeit only by a couple of eager bodies. A queue that appeared to be a varied gathering of keen Yorkshire pudding wrap converts who knew exactly what they wanted, probably having had it before, as well as the more curious foodie explorers who had travelled from afar to make that all-important decision on what to have in their very first Yorky Pud: pork, turkey, ham or beef?

We opted for pork with a couple of hearty sides in the form of roast potatoes and crackling. If you ask us, our ethos is generally ‘the messier the food, the better the food’, and as we raised each Yorky Pud to our mouths to take the first bite, drips of deliciously thick, stuffing-infused gravy oozed from the tiny gap at the base of the wraps. While the roast vegetables – predominantly carrot in these wraps – round out the Yorky Pud’s Sunday dinner theme, it’s obviously the tenderly textured pork and moreish stuffing found within the Yorkshire pudding’s crevices that were most responsible for today’s mouth-watering experience.

So, will we still be talking about the Yorky Pud in 2317? Maybe. Maybe not. But forget about your smartphones, your smartwatches, your smart this, and your smart that, because for all the world’s technological advances today in 2017, the Sunday roast dinner in a wrap really exists, and it’s called the Yorky Pud. Believe the hype. 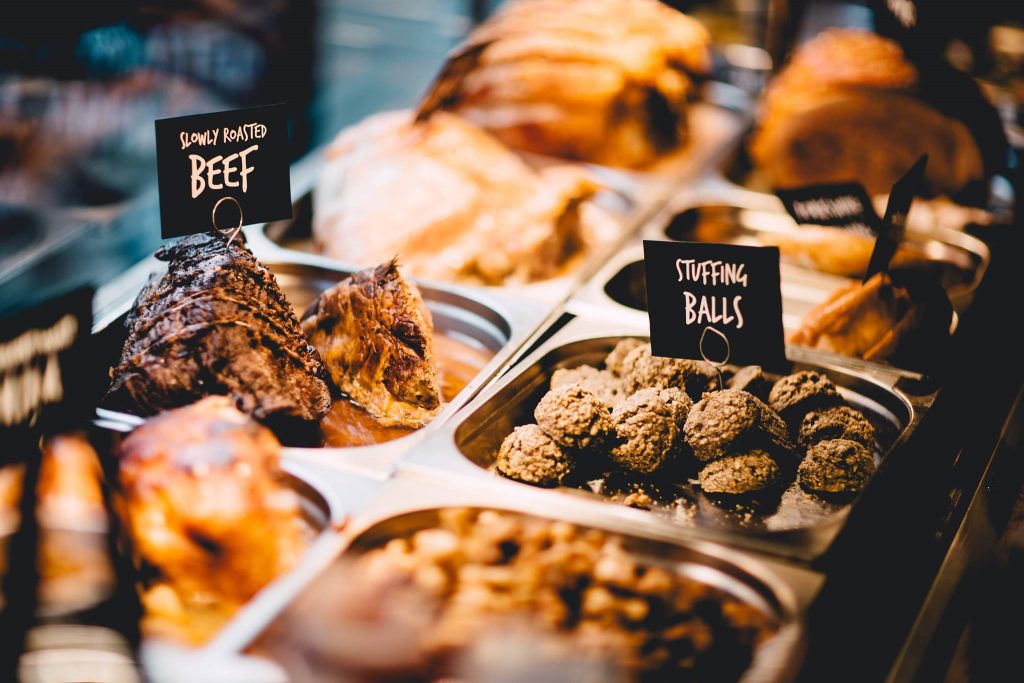 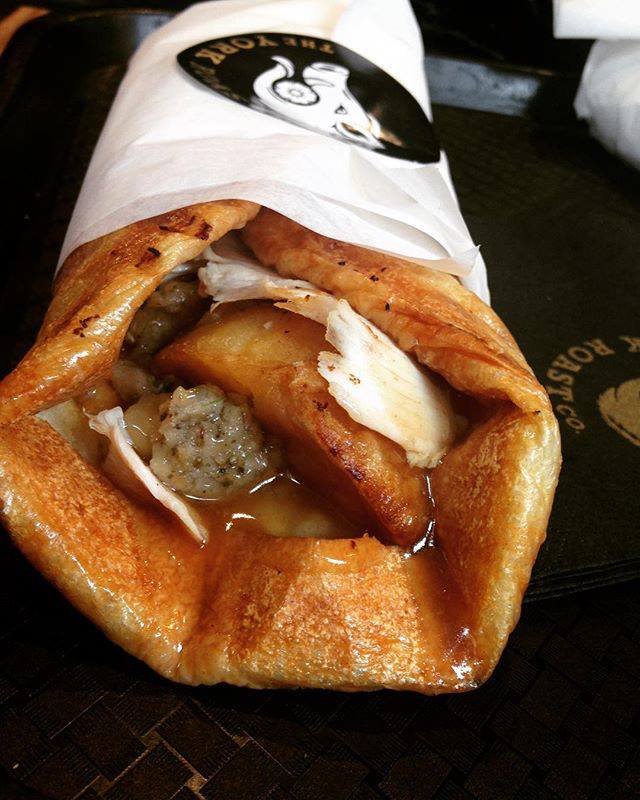 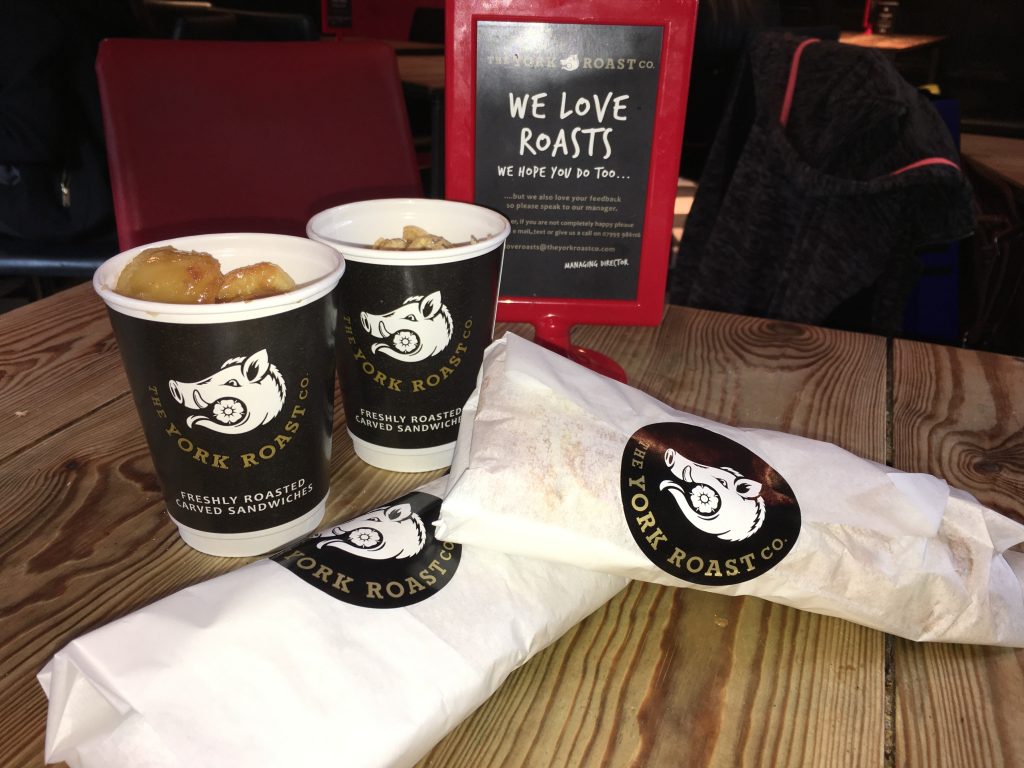 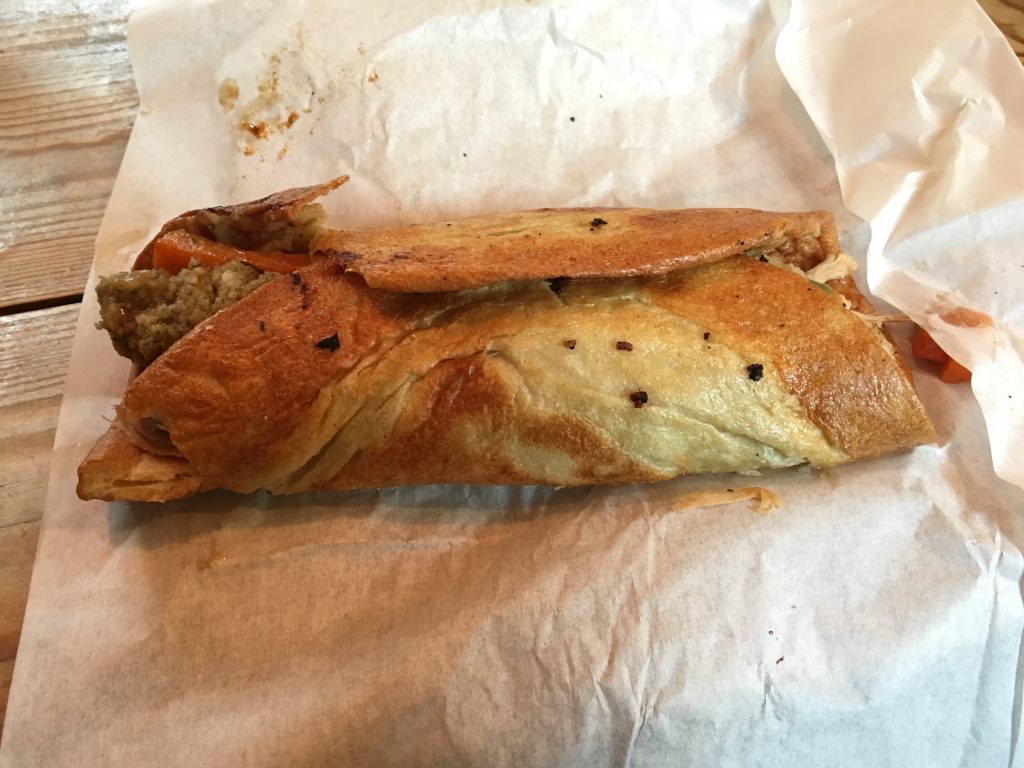 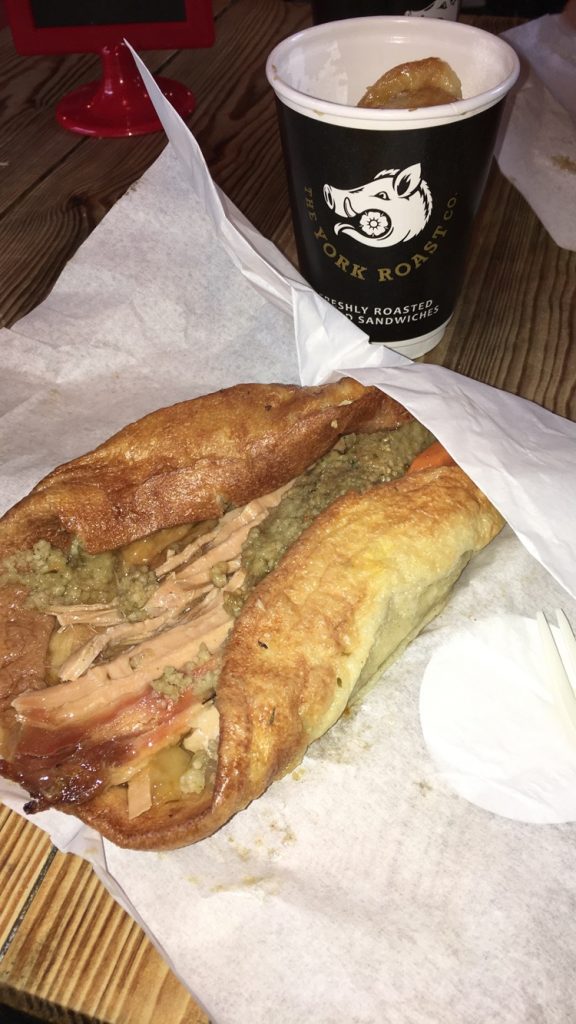 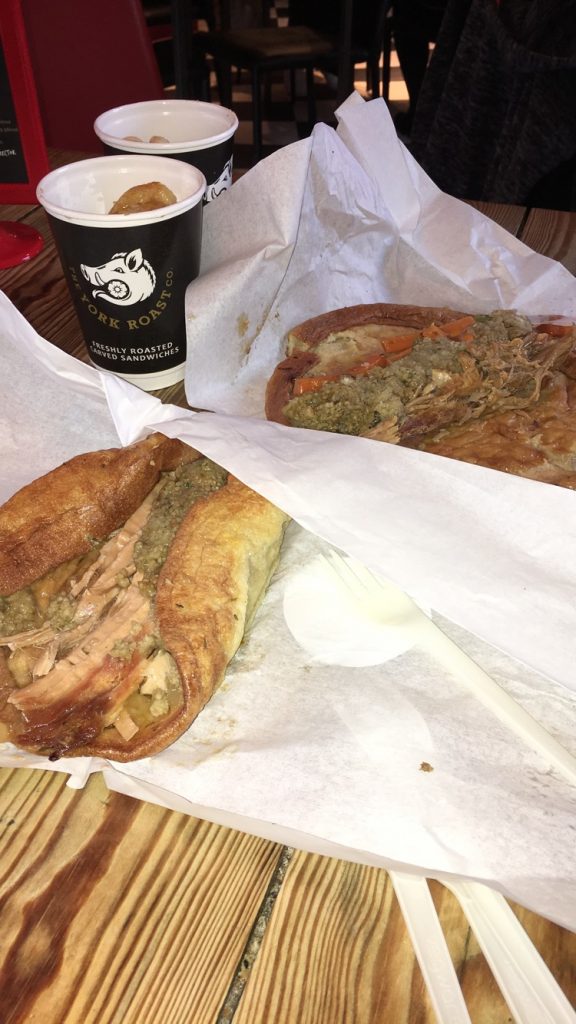 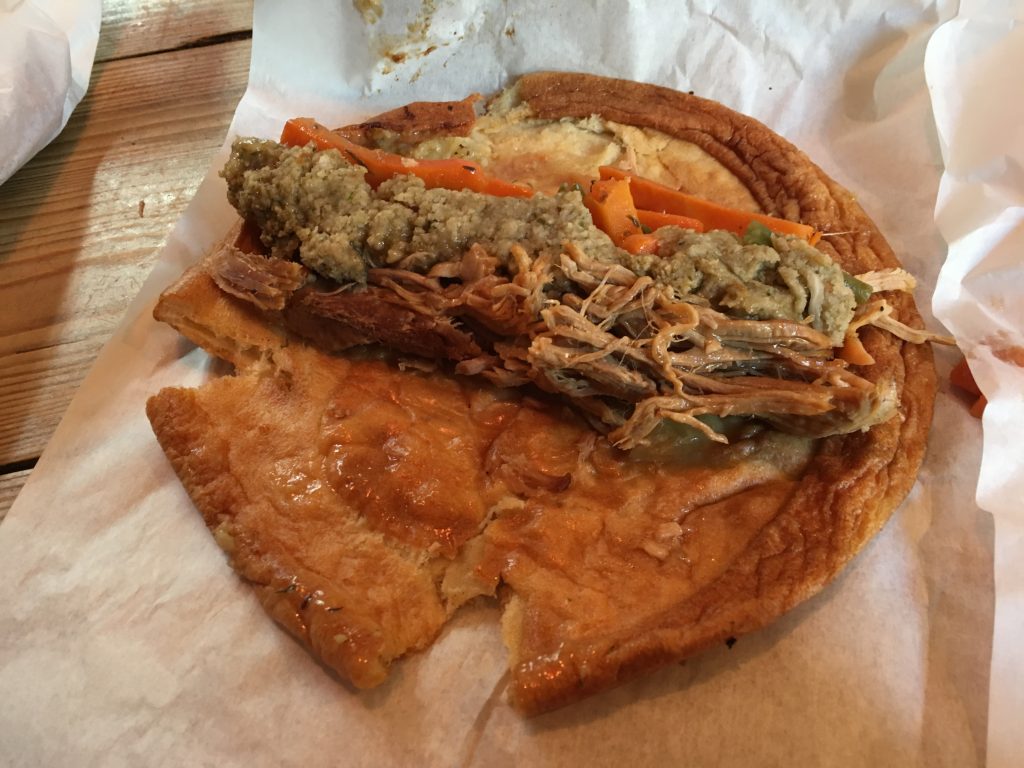 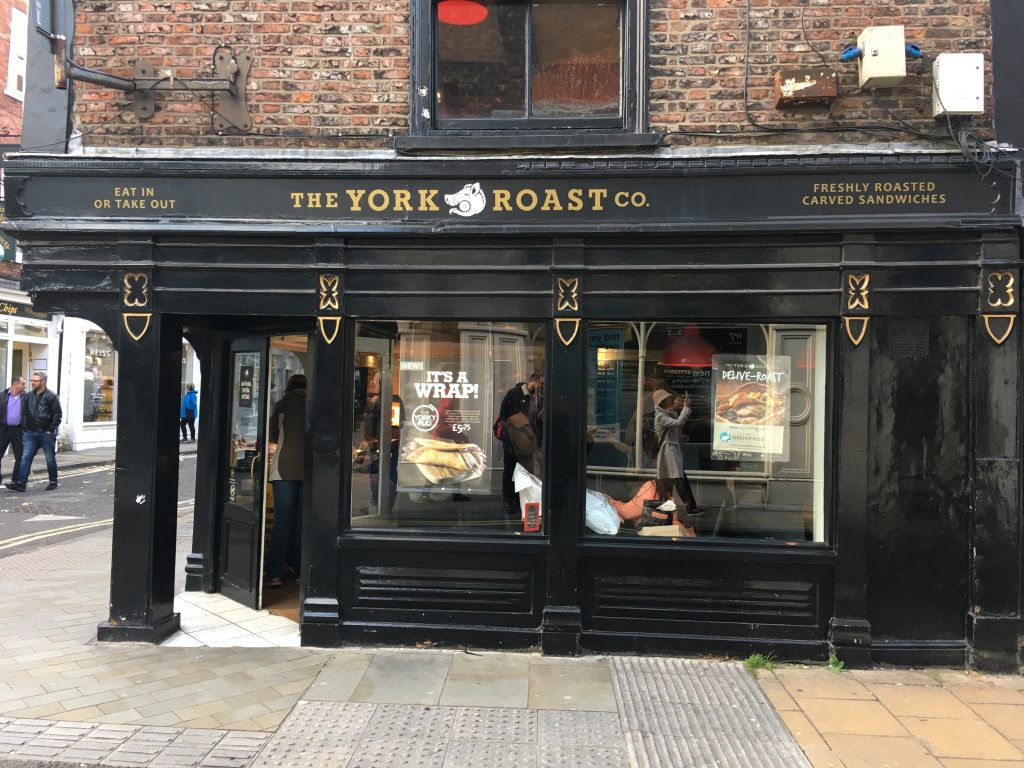